This is the first major work of Kyoko Okazaki (I reviewed what is usually considered her masterpiece, Helter Skelter: Fashion Unfriendly, here). Created in the late 1980s, during Japan’s boom economy, it tells the story of Yumi, a young office worker by day and prostitute by night. She engages in the latter occupation to keep her cute, spectacles-wearing pet crocodile in meat. The energetically-drawn manga details Yumi’s gradual romance with her stepmother’s much younger kept man, a university student and aspiring novelist. Along the way, we meet her little half-sister, as edgy-but-adorable as the crocodile itself, as well as her “wicked” stepmother, a woman consumed with resentment of Yumi. Okazaki’s whiplash tone is difficult to describe, yet it evokes the heroine’s worldview. For Yumi, past and future, regret and anxiety, hardly exist; rather, she seeks to wring the splendor out of each moment. Accordingly, her book expresses a paradoxical aesthetic of innocent cynicism. Seemingly serious matters—Yumi’s abuse at the hands of her johns, for instance, or her climactic beating of her stepmother—are handled very lightly, and even the manga’s concluding tragedy is played as something of a gag. Highly aestheticized lyricism jostles cuteness, both of them abraded against utter vulgarity: “And what’s with dad, getting vamped by a bitch whose pussy lips must be dangling out and flapping?” But there is no obvious satire intended here; in an afterword, Okazaki asserts that “all work is prostitution” and that “all work is love as well.” She further describes Pink as a story of “love and capitalism,” admonishing her readers that “being scared of [love and capitalism], like a kid who can’t swim is scared of a swimming pool, is lame. If you just fearlessly dive in, strangely enough you can swim all right!” Okazaki thus avoids the predictable opposition of love to capitalism (in which I have certainly indulged from time to time), and the even more predictable denunciation of capitalism. Pink ultimately associates manga itself with the capitalist world of universal love/prostitution, when the aspiring novelist is chided by his college classmate/stalker: 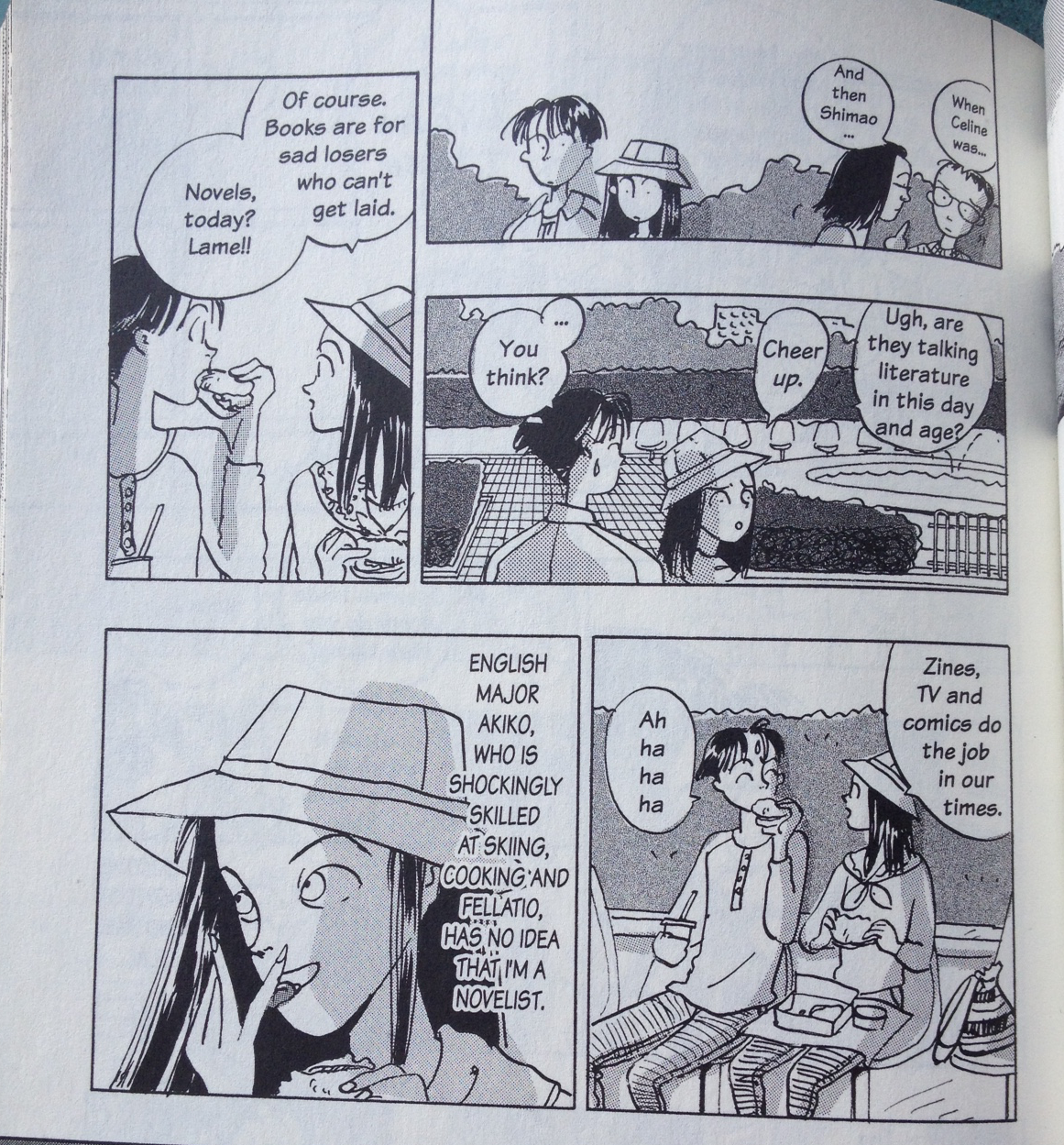